I am leaving a group critique with four of my peers from Takt situated in Friedrichshain, East Berlin. Takt is a three month artist's residency programme and we have a critique of our work every Tuesday morning. As we stroll down the sun-drenched street our thoughts turn to lunch so we choose to frequent a nearby café. We pass a building that is being renovated, through the metal and wood scaffolding is dark orange and red graffiti and builders converse through a dusty doorway. To the left of the building is a small soil quad with a tree growing in the middle and a metal triangle poking out of the ground for a bike to be locked to. This area has been used to dump some unwanted items, most likely from the building to the right. There is a group of projector slides strewn on the back of a broken television.

Like after all critiques, I am in an 'arty' mood and thus wish to seize this opportunity. The slides are face down and the top of the surface is black making it imposable to tell what is on the slides, there is also a liquid on the slides which for a moment I worry is urine but then decide is motor oil. To be on the safe side I pick up two of the less drenched slides with my thumb and index finger. I wash the slides in the bathroom of the café and wrap them in a piece of green tissue. I still have not seen what is on them. As I eat lunch I wonder if using vintage photography is overused, a hipster art trick. It is also, however, the idea of found objects; an appealing way of making art for broke art students as it doesn't require any money! I get home and putting these negativities aside I take a look at what I have found. Placing both slides against the frosted glass in my bedroom I peer in to what secrets they hold.

The first slide, which has two bits of red tape holding it together, is of the inside of an airplane; a clinical white tube with the back of a few heads, the most prominent being a balding man. It is shot in portrait, it has the number 85 written on the side in pencil followed by the words "crto" with another faded word that looks like "reare".

The second slide is of an idyllic looking villa. The slide is in landscape and has a small street sign on the wall that says "RUE CLOCHER" after a quick Google search it looks like this is French for "Street Tower". There are tall green vines scaling the building producing an ornate looking gold street lamp as if the plant itself has grown it.

I am happy with my find but what analysis can I draw from these objects the cosmos has granted me? The first slide is a reality; it is in portrait and when I hear the idea of a portrait, be it a person or experience, it tells me it is trying to capture a true likeness to reality. The second is an idealisation; it is in landscape and in my mind landscapes are idealised. It is as if the first picture is reality and the second is what the person on the plane is thinking of.

It also reminds me of an analogy of travel which is a few moments of true satisfaction and beauty crossed with a lot of waiting about and preparation. If you wish to admire the view you must climb the mountain. 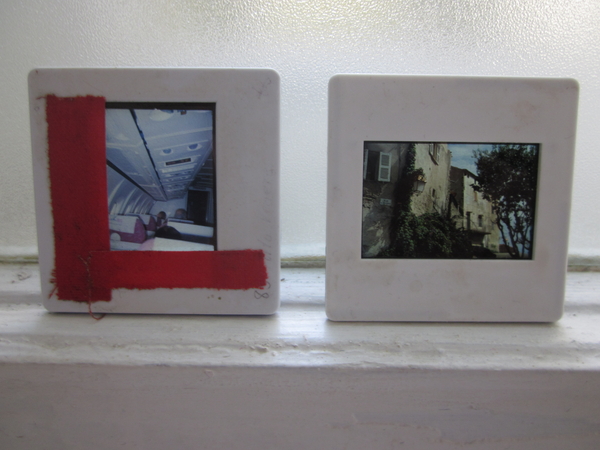